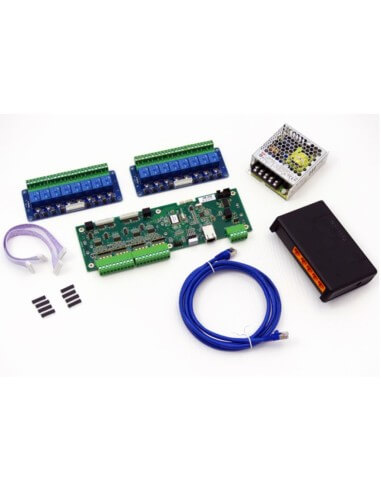 The Ether1616 is used to add additional inputs and outputs to an Acorn CNC controller.  Each Ether1616 board adds an additional 16 optically isolated inputs and 16 relay isolated outputs to the system, up to three Ether1616 boards can be added to an Acorn system for a total of 56 inputs and 56 outputs.  Three different input voltages can be used: 5 volts, 12 volts and 24 volt. Input voltages are mix and match capable and are selectable via bank of four of inputs at a time with the provided plug-in SIP (Single In-line Pack) resistors. The default input voltage is 24 VDC.
Both the Ether1616 and Relay 8 modules provide both Din Rail mounting holes and Standoff mounting holes to allow the DIY installer a wide variety of mounting possibilities.

The provided dedicated power supply is sized properly to provide enough power to drive the 16 relays.  There are indicator LED’s on Ether1616 Inputs and on the Relay 8 Modules that indicate the state of the Inputs and Outputs.

The Ether1616 as the name implies communicates with the Centroid CNC12 software via Ethernet connection to the CNC PC.

As Ether1616 is still in Beta this is only for the experienced user!