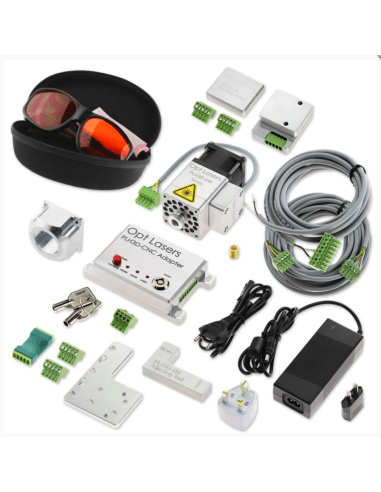 X-Carve Laser Upgrade Kit with PLH3D-6W-XF including all parts needed to mount and wire the PLH3D-6W-XF laser head on the X-Carve machine. Driver, power supply, docking station, and many other parts are included in the kit.

Upgrade your Shapeoko CNC to a Laser Engraver with this nice quality kit from Opt Laser. The kit holds all parts needed to upgrade the CNC. Included in the kit is the engenious Magnetic Mount that allow mounting/removing the laser in seconds when switching between CNC and Laser use. If the laser is taken off you can protect the connector with an magnetic lid (included).

About the PLH3D-6W-XF Engraving Laser Head

The leading 6 W laser from PLH3D series. Professional engraving laser head designed for industrial applications. Robust design, compatibility with all types of control signals used in CNC in 3D printing market as well as with a wide range of PSUs, strongest available in its size fan providing best cooling and smoke removal. Comes with lens regulator which allows changing the focus distance easily.

About the PLH3D-CNC Universal Laser Adapter

The laser head may be checked by generating a short laser pulse at maximum power.

Built-in safety means prevent misuse and unexpected behavior at emergency. The key switch protects the laser head against arming by children and other unauthorized persons. Arming the laser head is always done manually by the user, by pressing a button. A special circuitry prevents arming at any malfunction of internal electronics. The laser head is being automatically disarmed in case of emergency: loss of the mains supply, PSU failure, breaking or disconnecting the laser head cable. After disarming, the system remains in a safe state and rearming always requires pressing the button by the user.

Key features of the PLH3D-CNC Adapter: